In the world of DevOps it’s all about the scripts: I’ve seen some great work done by some clever people to create complex environments with multiple VMs all from scratch using PowerShell. That’s great, but unfortunately in the world of Lab Manager it just doesn’t work well at all.

We’ve begun the pretty mammoth task of generating a new suite of VMs for our Lab Manager deployment to allow the developers and testers to create multi-machine environments. I had hoped to follow the scripting path and create these things much more on the fly, but it wasn’t to be.

I hope to document our progress over the next few weeks. This post is all about the aims and the big issues we have that make us take the path we are following.

Let’s start with our requirements:

That’s quite a complex set of needs to meet. What we decided to build was the following suite of VMs:

In infrastructure terms we end up with a number of important elements:

The biggest problem with Lab Manager is the way Network Isolation works. Lab asks SCVMM to deploy a new environment. If network isolation is required (because you are deploying a DC and member servers more than once through many copies of the same servers) then Lab creates a new Hyper-V virtual network (named with GUID) and connects the VMs to that. It then configures static addresses on that network for the VMS. It starts with the DC and counts up.

My experience is that trying to be clever with servers that are sysprepped and then run scripts simply confuse the life out of Lab. You really need your VMs to be fully working and finished right out of the gate. Unfortunately, that mans building the full environment by hand, completely, and then storing them all with SCVMM before importing each VM into Lab.

There are still a few wrinkles that I know we have to iron out,even with this approach:

Both of these areas will have to be addressed during this week, so I’ll post an update on how we get on.

Even though we can’t use scripts to create our environment from bare metal, consistency is still really important. We are, therefore, using scripts to ensure that we are following a set of fixed, replicable steps for each VM build. By leaving the scripts on the VM when we finished, we also have some documentation as to what is configured. We are also trying, where possible, to ensure that if a script is re-run it won’t cause havoc by creating duplicate configurations or corrupting existing ones.

Each of our VMs has been generated in SCVMM using templates we built for the two base operating systems. That avoids differences in OS install and allows me to get a new VM running in minutes with very little involvement. By scripting our steps, should things go badly wrong we can throw away a VM and run through those steps again. It’s getting trickier as we move forward, though; rebuilding our SQL boxes once we have SharePoint installed would be a pain.

In fact, one of the most useful things that has come out of this project so far is a growing set of robust powershell modules that perform key functions for us. They are things that we have scripted already, but in the past these have been scripts we have edited and run manually as part of install procedures. Human intervention meant we created simpler scripts. This week I have been shifting some of the things those scripts do into functions. The functions are much more complex, as they carefully check for success and failure at every step. However, the end result is a separation of the function that does the work and the parameters that change from job to job. The scripts will will create for any given installation now are simpler and are paired with an appropriate module of functions.

Deciding where to spend time

Many will read this blog and raise their hands in despair at the time we are spending to build this environment. Surely the scripted approach is better? Interestingly, our developers would disagree. They want to be able to get a new environment up and running quickly. The truth is that our Lab/SCVMM solution can push a new multi-server rig out and have it live and usable far quicker than we could do with bare metal scripts. The potential for failure using scripts if things don’t happen in exactly the right order is quite high. More importantly, if devs are sat on their hands then billable time is being wasted. Better to spend the time up front to give us an environment with a long life.

Dev isn’t production, except it is, sort of…

The crux of this is that we need to build a production-grade environment. Multiple times. With a fair degree of variation each time. If I was deploying new servers to production my AD and network infrastructure would already be there. I could script individual roles for new servers. If I was building a throwaway test or training rig where adherence to best practice wasn’t critical then I could use the shortcuts and tricks that allow scripted builds.

Development projects run into difficulties when the dev environment doesn’t match the rigor of production. We’ve had issues with products like SharePoint, where development machines have run a simple next-next-finish wizard approach to installation. Things work in that kind of installation that fail in a production best practice installation. I’m not jumping for joy over the time it’s taking to build our new rigs, but right now I think it’s the best way.

I finally got time to upgrade my Surface Pro to Windows 8.1 Enterprise. One of the things I most want to test is DirectAccess, as I live and die by this on my main laptop. However, despite the computer object for my machine being in the group that the DA group policies are applied to, no DA settings appeared.

TIP: On Windows 8.1, use Get-DAClientExperienceConfiguration in a PowerShell window to check your settings.

It turned out the policy wasn’t being applied because of the default Windows Server 2012 option of creating a WMI filter to only apply the Direct Access group policy to laptops. That filter had a bunch of Windows version statements in it.

Open the Group Policy Management tool (on your DC or laptop with remote admin tools installed).

At the bottom of the policy is WMI Filtering. You will see a filter called “DirectAccess – Laptop only WMI Filter” 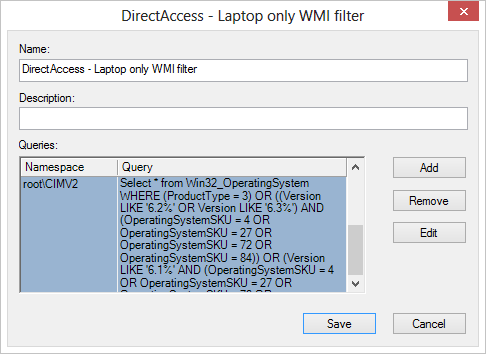 The original filter text is:

Windows 8.1 is version 6.3.x, so you need to change the filter toread as follows (edits highlighted in red):

Our good friends in the UK TechDays team have announced another raft of events in their fantastic IT Camps series. I’m hoping to be there for at least on of them and if you’re at all interested in Windows 8 or System Center 2012 I cant recommend them highly enough.

No slides, no marketing – just technical content, demo driven with as much audience participation as they can manage. Everyone I’ve spoken to at previous camps has enjoyed them and learned a great deal.

I’ll be helping with the server camp in York on the 5th of March and you might see me at other camps too.

Enough of the gushing plug, here are the dates and venues, with links so you can register:

If you want to know more about forthcoming Techdays keep an eye on the main events page.