Sometime ago we noticed an issue with My Tasks in Project Server. Certain users were unable to access My Tasks at all – they simply got a SharePoint error page.

A little jiggery-pokery with callstack and custom errors later, we saw that the error referenced a GUID for a task. I then searched the Project Server Publishing DB for the task GUID and subsequently located the project to which it belonged. If I edited the project in MS Project and updated the server, removing the task assignment from the user, they could access my tasks.

For anyone who has a similar problem, here are the SQL queries you need:

Most odd. So I logged a call with our friends in Microsoft Support.

It’s been parked for a while, but I received an email from support today advising me that the Infrastructure updates would help. Funnily enough, I’d already installed them (we keep our SharePoint farm as fully patched as we can), so that was almost all the way there.

Finally, they provided a short SQL script to run against the Publishing DB. This would identify any tasks that were orphaned and correct the issue. Luckily, we had none!

When I experienced the problem there were no hits in my old friend Google so hopefully this will help somebody, somewhere.

Here are the links to the infrastructure updates for completeness. Remember to read the docs carefully on installing these babies!

I can’t spend much longer playing with IE8 or my wife will skin me. However, from my cursory browsing experience I’m worried. Either the devs have a good deal of work to do or I’m going to be very busy with CSS rules for a while.

Here’s the University of Bradford site in IE8: 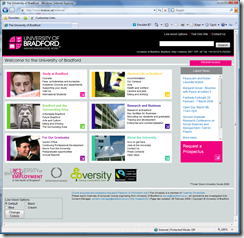 And to try to compare apples with oranges, here it is in Firefox 3 beta 3: 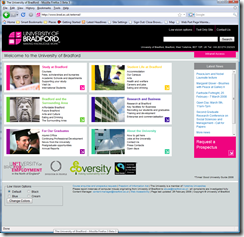 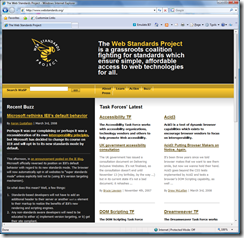 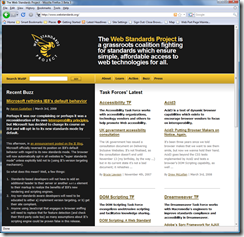 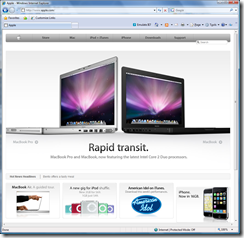 and Apple.com, Firefox 3b3: 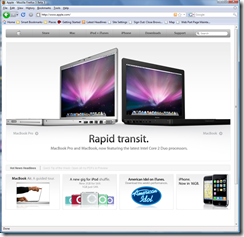 As you can see, there are issues with the placement of some elements on each of these pages. I have not yet started to investigate why, but I am honestly surprised. Given the much-touted, ‘vastly-improved’ web standards support I was not expecting the number of issues I have seen. Ironically, as usual, old style table layouts look great…

Well, the keynote just ended and I needed to check email so I thought I’d do a quick post. A good chunk of the keynote had already been covered by yesterday’s partner-only sessions. However, Mike Angiulo publicly announced that the Office 2007 family Service Pack 1 will be available on December 11th, 2007. I guess that means we can tell the world! I’m surprised, actually, that I haven’t noticed this on any of the SharePoint blogs I frequent.

Anyhoo… We were given a short demo of Project 14. It has some useful new features that should make it easier to build a new project when you don’t have all the details – much more so than Project 2007. Much to Paul’s horror, however, Project 14 has a shiny ribbon bar! I guess that’s going to be a real love/hate thing. Personally, I quite like the ribbon bar, but I can understand why some folk think of it as burying functionality because not all the millions of toolbar icons are visible at once.

Also interesting is that Project Portfolio Server is being merged into Project Server with version 14. As someone who is new to the area of EPM this is a product which I am not familiar with, but merging functionality into a single system would seem to me to have serious benefits, not least in terms of having one less system to manage.

I’m not going to blog every session I attend, but if I see something interesting I will post later. Right now, it’s time for the first ‘real’ session of the day – a sysadmin chalk and talk.

Well, it’s the end of day zero, the partner-only day here at the Madrid Project Conference. It’s been an interesting day. I’m not sure what I am allowed to say, but service pack 1 for Office 2007, which covers the desktop products, sharepoint, project server et al is very close to being available now. That was an interesting announcement, as we are looking at installing Project Server in Black Marble. I’d like to wait for SP1 – it makes sense – but because SharePoint will be patched at the same time I need to do some testing of our customisations first.

Meanwhile, outside the conference, we managed to leave the hotel for a few hours this morning before the partner event. The part of Madrid we are in has an incredible amount of building work underway; all all the roads are dual carriageways with big cloverleaf junctions. A fifteen minute taxi ride to the local Shopping Centre would probably have been a ten minute walk, had we realised where the shopping centre was in relation to the hotel. Ah well!

Tomorrow, the conference starts in earnest and I am planning to follow the system administration track, leaving the project management stuff to Paul and Jim. There are some interesting sessions ahead…

Finally, after all the excitement that Richard and Robert had in Seattle and Barcelona, I find myself in the Auditorium Hotel, Madrid for the EMEA Project Conference.

According to the multilingual sales blurb in my room, the hotel is the largest in Europe, and I must say it’s very nice. We flew in yesterday and today is an MS Partner-only day before the conference itself kicks off tomorrow.

Project Server is something we’re very interested in using ourselves, and it’s integration with SharePoint (MOSS/WSS) makes it an attractive solution to anybody who has already deployed MOSS for their corporate intranet, as we have.

Also on the agenda today is VSTS integration with Project Server, which I’m keen to see more on. Closing the loop between developer activity and project planning and monitoring can make a big difference to whether a project comes in on time and budget.

I’m here for the SysAdmin track, whilst Paul and Jim cover the managerial and best practice side of things. I’ll do my best to blog on what I see, although it’s a pretty packed few days, ending in a good sprint from the end of the last session at 3:15 on Wednesday to make it to the airport in time for our 5:25 flight back to Blighty.