Monday night saw the official celebration of the twentieth anniversary of the historic events which saw the fall of the Berlin Wall and paved the way for German reunification.

Sadly, the night was cold and wet – the rain was falling in torrents as we made our way to Potsdamer Platz and walked towards the Brandenburg Gate. We managed to stand right next to one of the large screens on which proceedings were to be shown – next to the gate and near the dominoes which were to topple during the night.

Cold it may have been, but the atmosphere was warm and friendly, with people from all over the world joining the celebrations. Within a few feet of us were some French students, Americans from across the USA, Italians, Germans, and Yorkshiremen.

The evening was a great mix of culture and spectacle. We were treated to opera (with a distinguished-looking Placido Domingo), the Berlin Philharmonic with Daniel Barenboim conducting, Bon Jovi and some other most likely very popular German bands that I’d never heard of.

There were also plenty of speeches from German and other European leaders, along with Lech Walesa and Michael Gorbechev (sorry if I’ve mis-spelled either of those – I’m composing with no internet connection).

The whole event was punctuated by the toppling of dominoes, which turned out to be done in stages, and topped off with a fireworks display over the Brandenburg Gate. 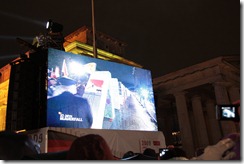 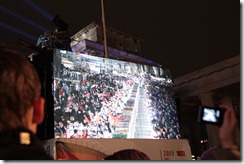 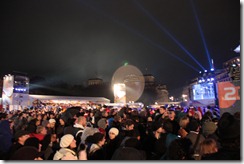 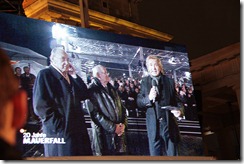 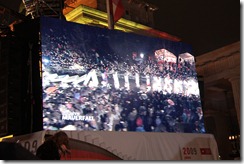 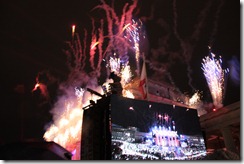 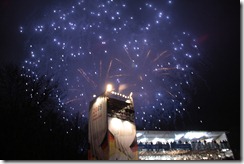 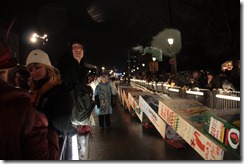 Once over, a sea of people flowed to the U- and S-Bahns. It’s a testament to the efficiency of Berlin public transport that the sea of people managed to quickly pile onto a succession of trains to be whisked away from Potsdamer Platz. 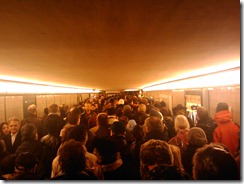 Most definitely a night to remember.