As you probably guess, Richard and myself were in Seattle for a short conference last week. The evening entertainment on one night was a trip to Gameworks. If you like playing video games with your mates, going head-to-head at things like Sega Rally, then you’ll have a good time in Gameworks.

I’m not the worlds greatest gamer, and I tend to struggle when it’s games that don’t use keyboard and mouse. Richard and I seemed to do best at the stand-up shooting games, the first of which was (to a non-hunting Brit) a hilarious hunting game where you had to blast moose with a pump action shotgun and avoid shooting cows.

I’m guessing that it wasn’t a terribly popular game, as my paltry efforts at taking down wildlife got me a high score. 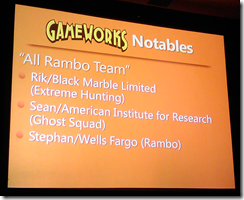