I have been using a Nokia 800 (Windows Phone 7.8) for a year or so and been happy with it. It does what I needed i.e. phone, email, media player mainly for podcasts. So given all the  reported issues with WP8 and podcasts (no Zune client to manage the subscription/sync and you can only subscribe through the store if you are in the USA) I was not too keen to ‘upgrade’ So how did it go?

The first couple of days were horrible. However, turns out many of the problems I had were due to poor quality USB cables. Once I used the short one that came with the phone as opposed to one I had used for months connected to my laptop base station, all the sync issues I had went away.

The 820 did not come with a rubber bumper case in the box, unlike the 800. I think these are essential to deal with the inevitable drops the phone will suffer, and the couple of millimetre bezel lifts the screen to avoid scratches, so I bought one.

I had to install the language pack before all the speech based functions worked. Now I really can’t remember if I had to do this on the 800, but I don’t recall it, I thought they were preinstalled.

But all these are niggles, the real issue was the podcasting, it was awful. Now I know podcasts are either a feature you use or not, there is little middle ground, what we in the UK call a Marmite feature. if you listen to podcasts it is probably the primary use of your phone. What was in Microsoft’s head when they cut the Zune functionality and suggested using ITunes for the sync I do not know. The current release of the Windows Phone Desktop is meant to address this issue allowing podcasts to be sync’d from iTunes for folders (which in turn can be sync’d via Zune). The problem is it just does not do the job, it does not honour the played flag, just syncing what it finds in the folder whether it is played or not. This becomes a real problem when you have about half the free space I had on my 800 (until I put in a MicroSD).

I did try with the Windows Phone Desktop for a day or two and gave up. So I moved to an App. The best I found was i Podcast, it just works. It is a shame it cannot drop the files into the phone media hub or make use of the MicroSD card, but these are minor issues. I did have a problem that it crashed and wiped out my subscriptions but I am told by the developers that this exception related bug was fixed in 2.1 which was released this week. Their email response to my query was excellent. Other than that it has been great. I would recommend purchasing the premium features so that it can store you subscription/playlist and sync them between device – very nice

I await with interest to see if the GDR2 update addresses the horror story that is WP8 out the box podcasting.

So one week down, will i go back to my 800? I think not, actually the 800 screen felt a little small now. However I will still say I am not using any of the new WP8 feature, so I would not pay a premium to upgrade? I would hold off, at least until the free upgrade point on my phone contract.

Microsoft have release Windows Phone 7.8 in the last few days. As usual the rollout appears to be phased, I think based on serial number of your phone. As with previous versions you can force the update, so jumping the phased rollout queue. The process is

I also had to repeat whole process 3 three for 3 different firmware and OS updates before I ended up with 7.8. 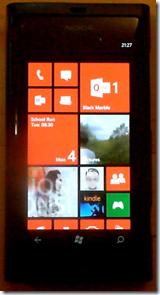 But now I have multi size tiles and the new lock screen.

If like me you listen to many podcasts, then swapping the PC your Phone7 syncs to collect the podcasta is a real pain. The problem being as far as I can see Zune has no podcast subscription export/import, so you are left with a lot of copy typing to re-enter them.

At last my Nokia Lumia 800 gets its firmware upgrade to allow tethering. The 8773 update seems to be made up of three updates, two operating system ones (which I managed to force down in the usual way), but this Nokia firmware one has taken weeks to get to me, forcing did not help. I had to wait.

I don’t think I am alone in not being too impressed with the update process. The throttling/delaying update process is probably Ok for the man in the street, who just wants a working phone, but there should be an easier way to get updates if you want/need them ASAP for development purposes or are trying to run consistent versions for all phones in an organisation.

I swapped to a Nokia Lumia 800 yesterday from my LG E900, all very quick an easy after my experience last month.

Recently I have had a problem with my LG E900 Windows Phone 7 running Mango. Whenever I try to make a purchase on marketplace I was getting the error “There has been a problem completing your request. Try again later” and seeing the error code 0x80070490. A search on the web, asking around everyone I thought might have an answer and placing a question on Microsoft Answers got me no where.

The phone had been working fine until a few days ago. The problem started when I tired to run the Amazon Kindle app (now my primary platform for reading, yes decided not to buy an actual Kindle at this point), this failed to start, it just kept returning to the phone home page. A power cycle of the phone had no effect. I have seen this before and fixed it with a remove and re-install of the app. However, though the remove was fine, whenever I try to reinstall I got the 0x80070490 error.

I tried installing another WP7 application (not a reinstall) but I got the same error.

As this is a development phone I was able to try to deploy an app XAP file I created from my PC. This worked without a problem.

I checked my account in Zune, I could login and see the applications I have purchased in the past, so I suspected the issue was corruption of the local catalogue on the phone, but I had no way to prove it.

At this point I was out of ideas so did a reset to factory settings on the phone. This was a bit of pain as my phone is one of the ones form the PDC last year, which Microsoft sourced in Germany. So it was off to Google Translate to help me through enough German screens to set the language to English.  But on the plus side I have learnt ‘notruf’ is German for ‘emergency call’.

So I had to

So this took about 30 minutes to get my phone back to something like my settings. Not a great owner experience, but we repave our PCs regularly to get ride of the accumulated rubbish, so why not our phones?

I had a problem with my LG E900 WP7 phone over the weekend, Outlook stopped synchronising with our office Exchange server.

It started when I got back from a trip Ireland. My phone switched back from roaming and started to use 3G for data again, as opposed to WIFI. Also over the weekend we had a connectivity problem from the office to the Internet so for a while I could not connect to any of our services from any device. However, even after both these things were sorted my Outlook still failed to sync, it said it was in sync but showed no new email since Friday when it was disconnected from my Irish ISP based MIFI in Ireland. No errors were shown. I waited until I got back to the office and tried a sync via our internal WIFI, all to no effect.

The fix was simple, and obvious, delete the Outlook account on the phone and recreated when I was in the office. Problem is I still have no idea why this issue occurred.

So that is 2 issues in about 6 months, much better than my previous few phones!

When I plugged my WP7 LG-E900 today it told me there was a update. When I tried to install this it failed, twice. So I changed USB cable and plugged it directly into a port on my laptop, not my usually phone syncing cable plugged into my laptops docking station, and it worked.

So not sure if it a USB cable quality issue, or a USB port issue, just something to remember.

When I plugged my WP7 LG-E900 today it told me there was a update. When I tried to install this it failed, twice. So I changed USB cable and plugged it directly into a port on my laptop, not my usually phone syncing cable plugged into my laptops docking station, and it worked.

So not sure if it a USB cable quality issue, or a USB port issue, just something to remember.

My WP7 LG-E900 decided to do a factory reset last night. It locked while playing the XBox Live GEODefense game on a particular busy level I had just lost (so lots of graphic processing). The phone paused for a while then restarted and ran the first use wizard, in German. This is because it is one of the PDC units that seem, given the packaging, to have been sourced from Vodafone German.

This is the first failure I have had on the phone, not a real pain as once the phone was back running in English it was quick to setup and sync, but 15 minutes I would rather have not spent.