First I thought I could do an in-place upgrade of my Windows 8RC PC, turns out you can’t (not sure if it would have been wise anyway) so it was format disk time.

I had hoped for a seamless install of Windows 8, but it hung after detecting devices. It seems it was the ‘old problem’ down to Lenovo/Nvidia Optimus graphics drivers issues. So I checked my bios settings which were set to Nvidia Optimus mode disabled (the only way I could get the RC to install), and changed it to Optimus mode enable and the install all worked without an issue. However though as a laptop it work find,  including with a second external monitor. I did have to set Optimus back to disabled and run in discrete video mode if I wanted to use a projector. It seems the Optimus mode certainly gets confused with the Benq projector we have in the office, it will allow you to extend your desktop but not duplicate it. As soon as you switch back to discrete graphic mode all is OK (though you do lose the ability to run two external monitors)

On completing the installation I ran a Windows update which found an update Lenovo display driver (it had no effect on the Optimus issue) and Conexant audio driver (one I had to manually update on the RC to get Lync 2013 working).

However, on checking the Device Manager I was still missing drives for a couple of devices

I think they are Power Management and Intel AMT, but the beta drivers from Lenovo don’t seem to work so I will need to keep looking.

So now to see how it runs, first impressions are good, seem quick.

I have been really pleased with Windows 8 RP on my Lenovo W520, I have had no major problems. I have seen the issues with slow start-up of networking after a sleep as others have seen, but nothing else.

However today I tried to do a Lync audio call with Lync 2013 Beta and found I had no audio. Up to now I had just used the drivers Windows 8 installed which had seemed OK. It turns out I had to install the Conexant Audio Software  8.32.23.5 from the Lenovo site. Once I did this and Lync was restarted the audio leapt into life. As I remember I had a similar issue with Windows 7 and getting the audio to work correctly on my Lenovo base station.

Top tip: use the up to date drivers

I have been finding the ‘hit the windows key and type’ means to launch desktop applications in Windows 8 quite nice. It means I get used to the same behaviour in Windows or Ubuntu to launch things, no need to remember menu locations just type a name, all very slickrun . However, I hit a problem today, I hit the windows key, typed Visual and expected to see Visual Studio 2012 and 2010, but I only saw Visual Studio 2012 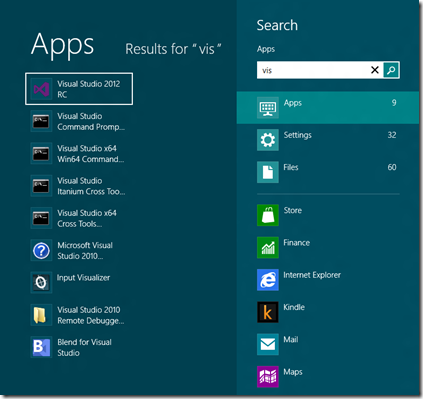 But both were there yesterday!

Now I am a creature of habit, even if it is a newly formed one, and I like to just type Vis, so this is how I got the link back into the Metro desktop, might be other ways but this is the one that worked for me

I posted recently on running Win8 RP on my Lenovo W520, well a few days on it is still working fine. I have adopted by usual practice of installing as few hardware vendor drivers/tool as possible, as I tend to find these make matters worse  most of the time. However, I as expected I could not only rely on just what came with Windows 8.

I will report more things I need to do as I find them.

I tried to install the Windows 8 CP on my Lenovo W520 with no success as I posted about in the past.I was only able to install Windows 8 CP only if I disabled the Nvidia graphics card and just used the integrated Intel controller. This was of no real use as I need dual monitors.

With the release of Windows 8 RP I though I would try again.

The first attempt failed with the same problem, it hung detecting devices. I check the BIOS and noticed I was set to discrete only (the Nvidia setting). I knew the RP should work on the W520 as other at the office have got it working. So I changed the BIOS to Nvidia Optimus (the auto swap system between Intel and Nivdia) and tried again – and it worked. So this is the first post from Windows 8.

Now to find drivers for the other devices in the W520

Whilst preparing for the Black Marble Windows 8 event tomorrow (still places available for this free event) I hit problem with VS11Beta and Metro projects.

I was sorting out a demonstration of remote debugging, I had a Samsung tablet PC running WIn8CP  and intended to use a WIn8Server CP running inside a VirtualBox VM on Windows 7 PC.

I had a good look around for a solution, most posts pointing to issues with upgrading Win7 to Win8, talk of hotfix, patches and waiting 2 days for licenses to expire. Turns out it was none of these. I eventually found the answer on the MSDN forums, you just can’t do this at present with Win8Server beta. Seems it did work with the build conference release, but not now. You have to use the desktop build of Win8CP for remote debugging.

So I created another VM using the desktop Win8CP, followed  same process and it was all fine. When I got to the place I was getting a warning dialog it asked for a LiveID and all proceeded as expect. I can now do a nice remote debugging demo.

Well if you are Black Marble are running  a free event on Windows 8 on the 30th of May in Leeds.

Also Jon Fowler, one of our development leads has just started a series of blog posts on converting Prims to .NET for Windows 8 metro style apps. This is all tied to his port of Prism to Metro which you can download from Codeplex

In case you did not make it to the Microsoft Build Conference, Black Marble are running a pair of free events in Leeds on the 12th of October on Windows 8 and the other announcements made in Anaheim earlier this month.

The morning session is focused on the IT pro side and the afternoon on development, so why not make a day of it?

To get more information, and to register for these free events, have a look at http://www.blackmarble.co.uk/Events

My development laptop is bitlocker’ed, and yours should be too. It provides a great and non-invasive way (assuming you have a TPM chip) to protect you and your clients data on a machine that is far to easy to steal or loose. However, whilst fiddling with Windows 8 I did trip myself up.

I have my PC setup for a boot to Windows 7 from a bitlocker’ed drive C with a non bitlocker’d drive D used to boot to Windows 2008 for demos (and hence no production data). To try out Windows 8 I added a new boot device, a boot from VHD partition. This edited the PC’s master boot record (MBR) and bitlocker did not like it. It thought the PC had a root kit or something similar to prompted me to enter a my bitlocker recovery key (which is 48 characters long) when I tried to boot to Windows 7. However, once this is done my bitlocker’ed Windows 7 partition worked find, but on each reboot I had to type the key in, bit of  pain. Removing the new VHD boot entry did not help, the MBR has still be edited, so bitlocker complained

The solution was actually easy, but took me a while to find as it does not seem to be clear in any documentation or via a search.

When the WIndows7 partition is booted open the control panel, select the bitlocker option and then suspend bitlocker, then restart it 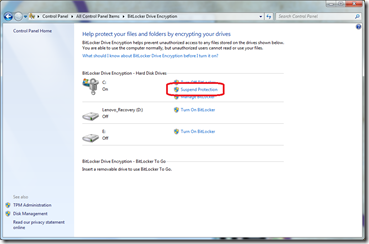 This has the effect of telling the bitlocker system that you are accepting the current hardware/MBR setting are correct. After this the PC boots as expected

If I were being more sensible I would suspend bitlocker prior to any fiddling about with Windows 8 – but the bits from Build was just too tempting……….