The use of variables is important in Azure DevOps pipelines, especially when using YML templates. They allow a single pipeline to be used for multiple branches/configurations etc.

The most common form of variables you see is are the predefined built in variables e.g. $(Build.BuildNumber) and your own custom ones e.g. $(var). Usually the value of these variables are set before/as the build is run, as an input condition.

But this is not the only way variables can be used. As noted in the documentation there are different ways to access a variable…

99% of the time I have been fine using just the $(var) syntax, but I recently was working on a case where this would not work for me.

I had a pipeline that made heavy use of YML templates and conditional task insertion to include sets of task based upon the manually entered and pre-defined variables.

The problems that one of the tasks, used in a template, set a boolean output variable $(outVar) by calling

This task created the output variable could be accessed by other tasks as the variable $(mytask.outvar), but it was set at runtime it not available at the time of the YML compilation.

This caused me a problem as it meant that it could not be used in the template’s conditional task inclusion blocks as it as not present art compile time when this code is evaluated e.g.

I tied referencing the variable using all forms of $ followed by brackets syntax I could think of, but it did not help.

The lesson here is that you cannot make a runtime value a compile time value by wishing it to change.

The only solution I could find was to make use of the runtime variable in a place where it can be resolved. If you wish to enable or disable a task based on the variable value then the only option is to use the condition parameter

So I got there in the end, it was just not as neat as I had hoped, but I do have a clearer understanding of compile and runtime variables in Azure DevOps YML

Disks filling up on our private Azure DevOps agents is a constant battle. We have maintenance jobs setup on the agent pools, to clean out old build working folders nightly, but these don’t run often enough. We need a clean out more than once a day due to the number and size of our builds.

To address this, with UI based builds, we successfully used the Post Build Cleanup Extension. However since we have moved many of our builds to YAML we found it not working so well. Turned out the problem was due to the way got source code.

The Post Build Cleanup task is intelligent, it does not just delete folders on demand. It check to see what the Get Source ‘Clean’ setting was when the repo was cloned and bases what it deletes on this value e.g. nothing, source, or everything. This behaviour is not that obvious.

In a UI based builds it is easy to check this setting. You are always in the UI when editing the build. However, in YAML it is easy to forget the setting, as it is one of those few values that cannot be set in YAML.

Once this is done it behaves as expected

I have just released Version 3.1.7 of my Azure DevOps Pipeline XplatGenerateReleaseNotes Extension.

This new version allows you to build release notes within a Multi-Stage YAML build since the last successful release to the current (or named) stage in the pipeline as opposed to just last fully successful build.

This gives more feature parity with the older UI based Releases functionality.

To enable this new feature you need to set the checkStage: true flag and potentially the overrideStageName: AnotherStage if you wish the comparison to compare against a stage other than the current one.

Back in the day I wrote a tool, TFS Alerts DSL, to do Work Item roll-up for TFS. Overtime I updated this to support VSTS (as Azure DevOps was then called), it’s final version is still available in the Azure DevOps Marketplace as the Azure DevOps Service Hooks DSL. So when I recently had a need for Work Item roll-up I did consider using my own tool, just for a short while. However, I quickly realised a much better option was to use the Aggregator CLI. This is a successor to the TFS Aggregator Plug-in and is a far more mature project than my tool and actively under development.

However, I have found the Aggregator CLI a little hard to get started with. The best ‘getting started’ documentation seems to be in the command examples, but I is not that easy to find. So I thought this blog post was a good idea, so I don’t forget the details in the future.

In this latest version of the Aggregator the functionality is delivered using Azure Functions, one per rule. These are linked to Azure DevOps Service hook events. The command line tool setup process configures all of the parts required setting up Azure resources, Azure DevOps events and managing rules.

And once all this done you should have a working system. If you are using the the test rules then quickest option to see it is working is to

I have added another new feature to my Cross Platform release note generator. Now, when using Handlebars based templates you can optionally get the parent or child work items for any work item associated with build/release

To enable the feature, as it is off by default, you need to set the  getParentsAndChildren: true parameter for the task, either in YAML or in the handlebars section of the configuration.

This will add an extra array that the template can access relatedWorkItems. This contains all the work items associated with the build/release plus their direct parents and children. This can then be accessed in the template

This is a complex way to present the extra work items, but very flexible.

The addition of Handlebars based templating for my Cross Platform Release Notes Task has certainly made it much easier to release new features. The legacy templating model it seem is what had been holding development back.

This is used in Handlebars based template as follows

Back in early 2016 I wrote an Azure DevOps Extension to wrapper Pester, the Powershell unit testing tool. Over the years I updated it, and then passed the support of it over to someone who knows much more about Powershell and Pester than I Chris Gardner who continued to develop it.

With the advent of cross-platform Powershell Core we realized that the current extension implementation had a fundamental limitation. Azure DevOps Tasks can only be executed by the agent using the Windows version of Powershell or Node. There is no option for execution by Powershell Core, and probably never will be. As Pester is now supported by Powershell Core this was a serious limitation.

To get around this problem I wrote a Node wrapper to allow the existing Powershell task to be executed using Node, by running a Node script then shelling out to Powershell or Powershell Core. A technique I have since used to make other extensions of mine cross-platform

Around this time we started to discuss whether my GitHub repo was really the best home for this Pester extension, and in the decided that this major update to provide cross-platform support was a good point to move it a new home under the ownership of Pester Project.

So, given all that history, I am really pleased to say that I am deprecating my Pester Extension and adding instructions that though my extension is not going away and will continue to work as it currently does, it will not be updated again and all users should consider swapping over to the new cross-platform version of the extension that is the next generation of same code base but now owned and maintained by the Pester project (well still Chris in reality).

Unfortunately, Azure DevOps provides no way to migrate ownership of an extension. So to swap to the new version will require some work. If you are using YAML the conversion is only a case of changing the task name/id. If you are using the UI based builds or release you need to add the new task and do some copy typing of parameters. The good news is that all the parameter options remain the same so it should be a quick job.

Also please note that any outstanding issues, not fixed in the new release, have been migrated over to the extensions now home, they have not been forgotten.

So hope you all like the new enhanced version of the Pester Extension and thanks to Chris for sorting the migration and all his work support it.

This is one of those blog posts I write to remind my future self how I fixed a problem.

I have a release that installs VSTest and runs some integration tests that target .NET 4.6 x64. All these tests worked fine in Visual Studio. However, I got the following errors for all tests when they were run in a release

I needed to tell vstest.console.exe to run x64 as opposed to it’s default of x32. This can be done with a command line override –platform:x64 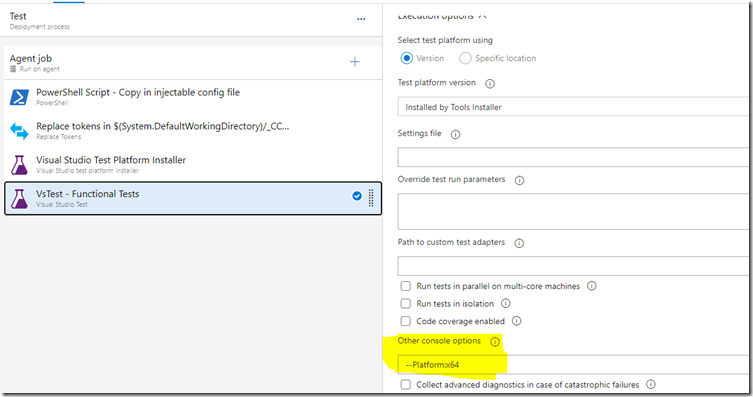