At Black Marble we have been migrating our DevTest labs to from on-premises TFS Lab Management to a mixture of on-premise and Azure hosted Lability defined Labs as discussed by Rik Hepworth on his blog. I have only been tangentially involved in this effort until recently, consuming the labs but not creating the definitions.

So this post is one of those I do where I don’t want to forget things I learnt the hard way, or to put it another way asking Rik or Chris after watching a 2 hour environment deploy fail for the Xth time.

Hope these pointers help others, as well as myself, next time Lability definitions are written

I will be speaking at Leeds DevOps on the 21st of July on the subject of Desired State Configuration (DSC).

‘In the Windows world, due to its API based architecture, deployment is too often not as simple as copying an EXE and updating a text configuration file. Desired State Configuration is an attempt to ease the pain we suffer in this space. Providing a set of tools that can be leveraged by any set of deployment tools whether in a Windows or heterogeneous environment. In this session we will look at what DSC is, what resource are available and how to write your own’.

The event is at the The Node in Leeds, tickets are free and are available over on Eventbrite or meetup.com

Update 21 Aug 2015 – This post contains all the basic information, but there is an improved PowerShell script discussed in Using Release Management vNext templates when you don’t want to use DSC scripts – A better script

Many web sites are basically forms over data, so you need to deploy some DB schema and something like a MVC website. Even for this ’bread and butter’ work it is important to have an automated process to avoid human error. Hence the rise in use of release tools to run your DACPAC and MSDeploy packages.

In the Microsoft space this might lead to the question of how Desired State Configuration (DSC) can help? I, and others, have posted in the past about how DSC can be used to achieve this type of deployment, but this can be complex and you have to ask is DSC the best way to manage DACPAC and MSDeploy packages? Or is DSC better suited to only the configuration of your infrastructure/OS features?

You might ask why would you not want to use DSC, well the most common reason I see is that you need to provide deployment script to end clients who don’t use DSC, or you have just decided want basic PowerShell. Only you will be able to judge which is the best for your systems, but I thought it worth outlining an alternative way to do deployment of these package using Release Management vNext pipelines that does not make use of DSC.

Let us assume we have a system with a SQL server and a IIS web server that have been added to the Release Management vNext environment. These already have SQL and IIS enabled, maybe you used DSC for that?

The vNext release template allows you to run either DSC or PowerShell on the machines, we will ignore DSC, so what can you do if you want to use simple PowerShell scripts?

Where do I put my Scripts?

We will place the PowerShell scripts (and maybe any tools they call) under source control such that they end up in the build drops location, thus making it easy for Release Management to find them, and allowing the scripts (and tools) to be versioned. 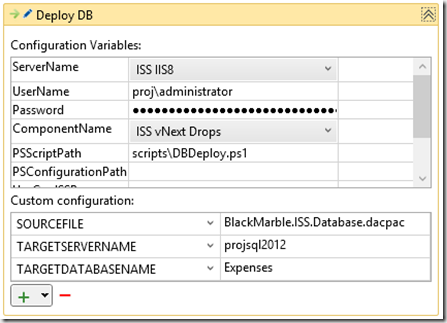 Remember that you don’t have to be the SQL server to run SQLPACKAGE.EXE, it can be run remotely (that is why in the screen shot above the ServerName is ISS IIS8 not SQL as you might expect)

This is called as follows 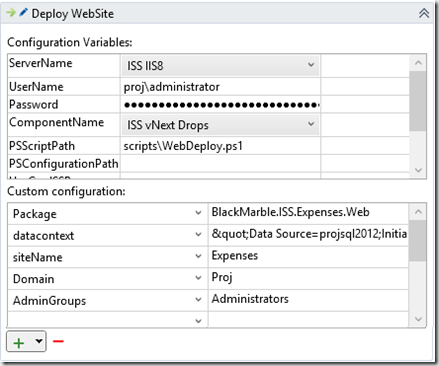 So I think these reusable scripts give a fairly  easy way to make use of  vNext Release Management pipelines. They can also easily be given to clients who just want to manually run something.

You do seem to have to register/login to see the content, so I can’t deep link to my session, but browsing the catalogue is a good idea there are some great sessions