As I have posted many times we make use of TFS Lab Management to provide network isolated dev/test environments. Going forward I see us moving to Azure Dev Labs and/or Azure Stack with ARM templates, but that isn’t going to help me today, especially when I have already made the investment in setting up a Lab Management environments and they are ready to use.

One change we are making now is a move from the old TFS Release Management (2013 generation) to the new VSTS and TFS 2015.2 vNext Release tools. This means I need to be able to trigger automated tests on VMs within Lab Management network isolated environments with a command inside my new build/release process. I have posted on how to do this with the older generation Release Management tools, turns out it is in some ways a little simpler with the newer tooling, no need to fiddle with shadow accounts etal. 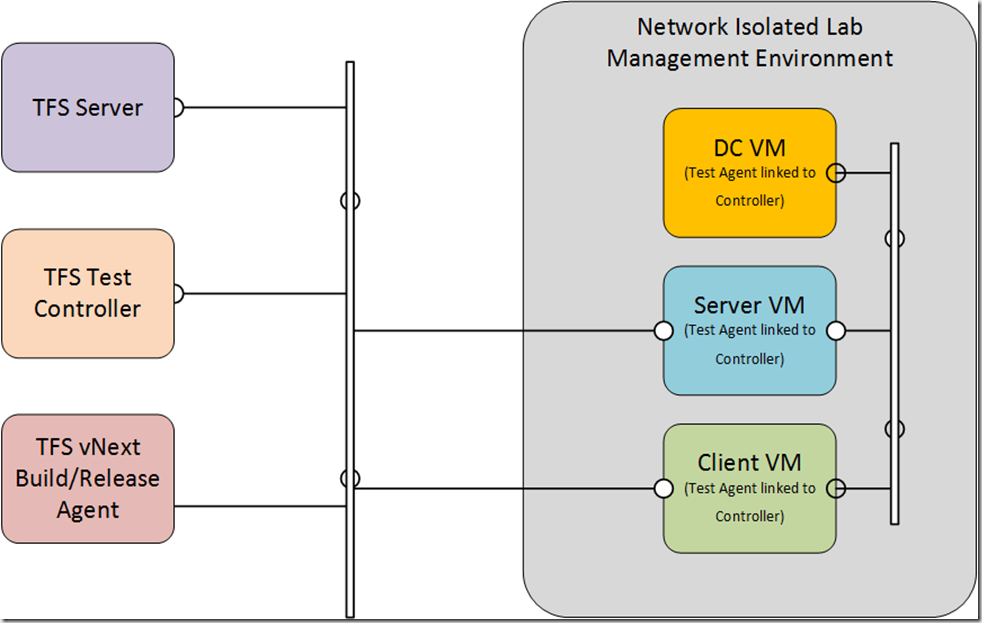 The constraints are these

The solution I adopted was to write a PowerShell script that performs the same function as the TCMEXEC.PS1 script that used to be run within the network isolated Labe Environment by the older Release Management products.

The difference is the old script shelled out to run TCM.EXE, my new version makes calls to the new TFS REST API (and unfortunately also to the older C# API as some features notably those for Lab Management services are not exposed via REST). This script can be run from anywhere, I chose to run it on the TFS vNext build agent, as this is easiest and this machine already had Visual Studio installed so had the TFS C# API available.

You can find this script on my VSTSPowerShell GitHub Repo.

The usage of the script is

In some ways I think this script is an improvement over the TCMEXEC script, the old one needed you to know the IDs for many of the settings (loads of poking around in Microsoft Test Manager to find them), I allow the common names of settings to be passed in which I then use to lookup the required values via the APIs (this is where I needed to use the older C# API as I could not find a way to get the Configuration ID, Environment ID or Test Settings ID via REST).

There is nothing stopping you running this script from the command line, but I think it is more likely to make it part of release pipeline using the PowerShell on local machine task in the build system. When used this way you can get many of the parameters from environment variables. So the command arguments become something like the following (and of course you can make all the string values build variables too if you want)

Obviously this script is potentially a good candidate for a TFS build/release task, but as per my usual practice I will make sure I am happy with it’s operation before wrappering it up into an extension.

Previously I reported there was a known issue that the test results were associated with the build, but not the release. It turns out this was due to the AD account the build/release agent was running as was missing rights on the TFS server. To fix the problem I made sure the account as configured as follows””: