I am finding  myself writing a lot of PowerShell at present, mostly for VSTS build extensions. Here I hit a problem (or is it an opportunity for choice?) as to what development environment to use?

So I have found myself getting the basic scripts working in the PowerShell ISE then moving to VS Code to package up the task/extensions as this means writing .JSON too – so awkward

This gets worse when I want to add Pester based unit tests, I needed a better way of working, and I chose to focus on VS Code

The PowerShell Extension for VS Code

Visual Studio Code now supports PowerShell. Once you have installed VS Code you can install the extension as follows

Once this extension is installed you get Intellisense etc. as you would expect. So you have a good editor experience, but we still need a F5 debugging experience.

Setting up the F5 Debugging experience

Visual Studio Code can launch any tool to provide a debugging experience. The PowerShell extension provides the tools to get this running for PowerShell.

I found Keith Hill provided a nice walkthrough with screenshots of the setup, but here is my quick summary 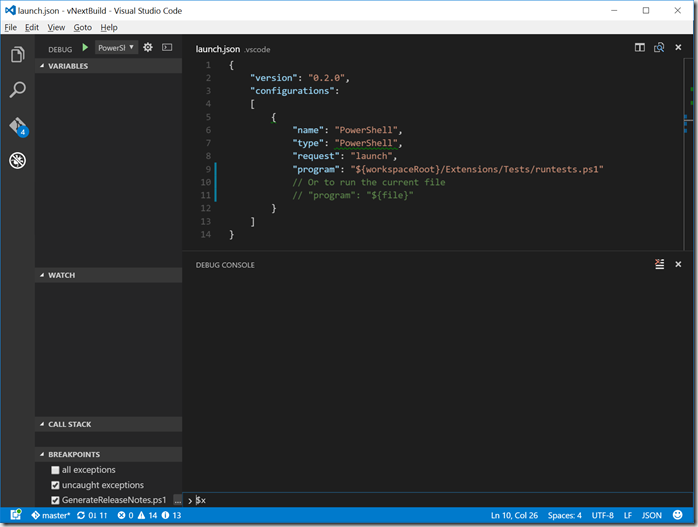 We need to edit this file to tell it what to run when we press F5. I have decided I have two options and it depends on what I am putting in my Git Repo as to which I use

Note: I have seen some comments that if you edit the launch.json file you need to reload VS Code for it to be read the new value, but this has not been my experience

So now when I press F5 my Pester tests run, I can debug into them as I want, but that raises some new issues due to the requirements of VSTS build tasks

Changes to my build task to enable testing

A VSTS build task is basically a PowerShell script that has some parameters. The problem is I needed to load the .PS1 script to allow any Pester tests to execute functions in the script file. This is done using the form

# Load the script under test
. “$PSScriptRoot\..\..\..\versioning\versiondacpactask\Update-DacPacVersionNumber.ps1”

Problem 1: If any of the parameters for the script are mandatory this include fails with errors over missing values. The fix is to make sure that any mandatory parameters are passed or they are not mandatory – I chose the latter as I can make any task parameter ‘required’ in the task.json file

Problem 2: When you include the script it is executed – not what I wanted at all. I had to put a guard if test at the top of the script to exit if the required parameters were not at least reasonable – I can’t think of a neater solution

# Load the script under test
. “$PSScriptRoot\..\..\..\versioning\versiondacpactask\Update-DacPacVersionNumber.ps1”

So I think I now have a workable solution with a good IDE with a reasonable F5 debug experience. Ok the PowerShell console in VS Code is not as rich as that in the PowerShell ISE, but I think I can live with that given the quality of the rest of the debug tools.