The first problem was that in the InitiateReleaseFromBuild.ps1 script defaults to a hardcoded username and password. You should really be using the current credentials. To do this make sure the lines around line60 in the script are as shown below (or enter valid credentials if you don’t want to use default credentials)

The 500 error was stranger. Turns out the issue was the registration of our TFS server in Release Management.

Using the dialogs in the RM client we has registered our TFS server, this had generated the URL https://tfs.domain.com:443/tfs. If we ran the InitiateReleaseFromBuild.ps1 script with this URL set as a parameter we got the 500 error, the RM logs showed the workflow could not start. Eventually we realised it was because RM thought it could not access the TFS server. So the problem was that at some point  between the script being run and the RM server processing the URL the :443 had been removed; presumably because this is the default for HTTPS and some layer was being ‘helpful’. This meant that the RM server was trying to string match the URL https://tfs.domain.com/tfs against https://tfs.domain.com:443/tfs which failed, hence the workflow failed.

The fix was to edit the TFS registration in RM to remove the port number, leave the field empty (not that obvious as the dialog completes this field for you when you select HTTPS) 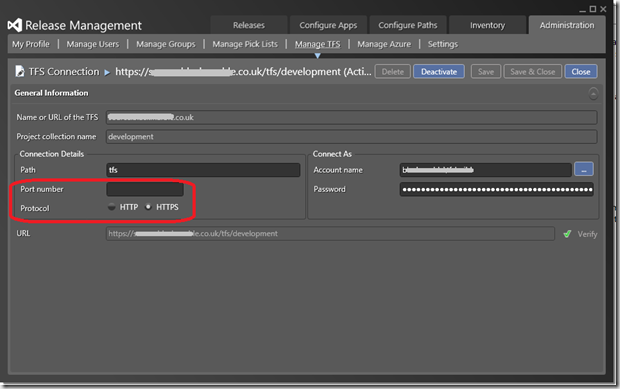 Once this was done the URL matching worked and the release pipeline triggered as expected.