I have worn a Polar s610 heart rate monitor as my watch for years (probably 15+), as I write it needs another battery swap, which means sending it to Polar, something I have done a couple of times in the past for servicing The batteries in the watch last 5 years or so, in the associated heart rate monitor strap maybe a bit more depending on usage. 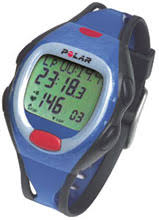 The point is I am used to having a device that ‘can’ give heart rate information, it seems normal, but I do need to remember to put on the heart rate strap, something I would only usually do for a race or specific training set. Now don’t get me wrong having the s610 does not mean I am a talented athlete, but I do have good idea of my heart rate for any given sporting activity

So this week I got hold of a Microsoft Band, nice timing as my s610 needs that new battery, but how has the Band done?

Whilst in the USA last year I had tried on other people’s Bands and felt them cumbersome, but mine is a small (previously I had only tried on large or mediums). Actually I find it little worse on the wrist than the s610. So tip here – it seems sizing is critical, especially if have spindly little wrists like me. Like compression sport wear, if in doubt err to a smaller size.

Beyond being a watch, I have been using it to track my runs and cycling and the HR seems accurate, at least the numbers are within a few beats of what I would expect on the s610, and it is so much easier than remembering the monitor strap for my Polar. It is great that it gets so much information so easily, and that it  can push it onto other services as I want without me having to play with modem style audio based Polar SonicLink (I did say my s610 is old)

But of course I do have some issues:

So first thoughts, loads better than I expected, all my niggles are minors and are more to do with current battery technology than the device itself. For the price, £169 at Amazon UK for pre-order, an interesting alternative to Garmin or Polar. Certainly got some interest at the 10K race I did this morning.