I have been playing around with the idea of using a DD-WRT-V router on a Hyper-V VM to connect my local virtual machines to the Internet as discussed by Martin Hinshlewood in his blog post. I learned a few things that might be of use to others trying the same setup.

What I used to do

Arguably I could have had just one ‘public’ virtual switch and connected it to either my Ethernet or Wifi as needed. However, I found it easier to swap virtual switch in the VM settings rather than swap the network adaptor inside the virtual switch settings. I cannot really think of a compelling reason to pick one method over another, just person taste or habit I guess.

This setup had worked OK, if I needed to access a VM from my host PC I used the internal switch. This switch had no DHCP server on it, so I used the alternate configuration IP addresses assigned by Windows, managing machine IP addresses via a local hosts file. To allow the VMs to access the internet I added a second network adaptor to each VM which I bound to one of the externally connected switches, the choice being dependant which Internet connection I had at any given time.

However, all was not perfect, I have had problems with some Linux distributions running in Hyper-V with then not getting an IP address via DHCP over Wifi. There was also the complexity of having to add second network adaptors to each VM.

So would a virtual router help? I thought it worth a try, so I followed Martin’s process. But hit a few problems.

Setting up the DD-WRT router

As Martin said his post more work was needed to fully configure the router to allow external access. The problem I had for a long time was that as soon as I enabled the WAN port I seemed to lose connection. After much fiddling this was the process that worked for me

So now all my VMs connected to the virtual switch could get a 192.168.1.x address via DHCP (using their single network adaptors) but they could not see the internet. However, on the plus side DHCP seems to work OK for all operating Systems, so my Linux issues seemed to be fixed

It is fair to say I now had a fairly complex network, so it was no unsurprising I had routing issues. 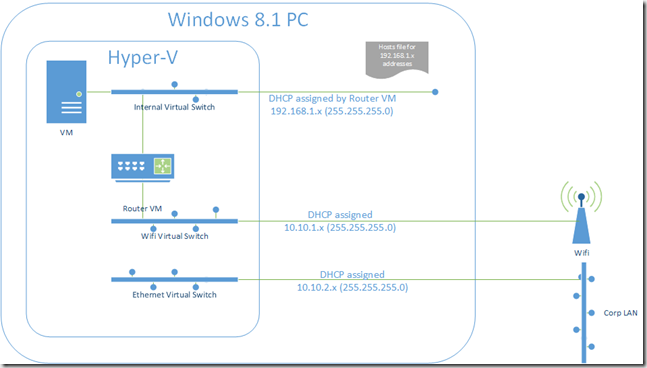 The issue seems to have been that the VMs were not being passed the correct default router and DNS entries by DHCP. I had expect this to be set by default by the router, but it was not the case. They seem to need to be set by hand as shown below.

Once these were set, the change saved on the router and the VMs renewed their DHCP settings they had Internet access

At one point I thought I had also lost Internet access from my host PC, or the Internet access was much slower. I though I had developed a routing loop with all traffic passing through the router whether it was needed or not. However, once the above router gateway IP settings were set these problem when away. 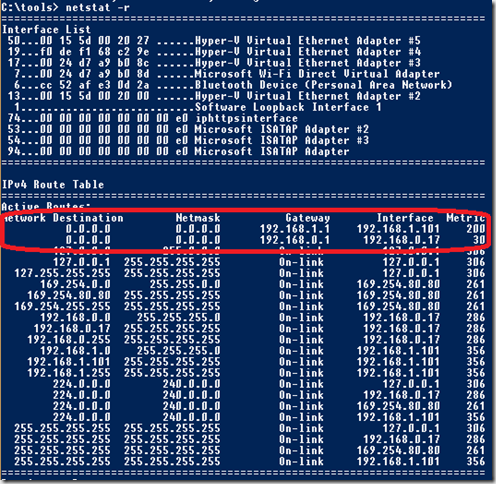 It was at this time I noticed the problem of getting a DHCP based IP address from Wifi had not gone away completely. If I had my router’s WAN port connected to my WiFI virtual switch, depending on the model/setup of WiFI router DHCP worked sometimes and sometimes not. I think this was mostly down to an authentication issue; not a major issues as thus far the only place I have a problem is our office where our WiFi is secured via radius server based AD authentication. Here I just switched to using either our guest WiFi or our Ethernet which both worked.

So is this a workable solution?

It seems to be OK this far, but there were more IP address/routing issues during the setup than I would like, you need to know your IPV4.

There are many option on the DD-WRT console I am unfamiliar with. By default it is running just like a home one, in a Network Address Translation (NAT) mode. This has the advantage of hiding the internal switch, but I was thinking would it be easier to run the DD-WRT as simple router?

The problem with that mode of operation is I need to make sure my internal virtual LAN  does  not conflict with anything on networks I connect to, and with automated router protocols such as RIP could get interesting fast; making me a few enemies with IT managers who networks I connect too.

A niggle is that whenever I connect my PC to a new network I need to make sure I remember do a DHCP renew of my WAN port (Status > WAN > DHCP Renew), it does  not automatically detect the change in connection.

Also I still need to manage my VMs IP addresses with a host file on the host Windows PC. As I don’t want to edit this file too often, it a good idea to increase the DHCP lease time on the router (Setup > Basic Setup) to a few days instead of a day.

As to how well this work we shall see, but it seems OK for now