With Visual Studio 2012 there were changes in the way Web Publishing worked; the key fact being that the configuration was moved from the .csproj to a .pubxml in the properties folder. This allows them to be more easily managed under source control by a team. This does have some knock on effects though, especially when you start to consider automated build and deployment.

Up to now we have not seen issues in this area, most of our active projects that needed web deployment packages had started in the Visual Studio 2010 era so had all the publish details in the project and this is still supported by later versions of Visual Studio. This meant that if we had three configurations debug, lab and release, then there were three different sets of settings stored in different blocks of the project file. So if you used the /p:DeployOnBuild=True MS Build argument for your TFS build, and built all three configurations you got the settings related to the respective configuration in each drop location.

This seems a good system, until you consider you have built the assemblies three times, in a world of continuous deployment by binary promotion is this what you want? Better to build the assemblies once, but have different (or transformed) configuration files for each environment/stage in the release pipeline. This is where a swap to a .pubxml file helps.

You create a .pubxml file by running the wizard in Visual Studio via right click on a project and selecting Publish 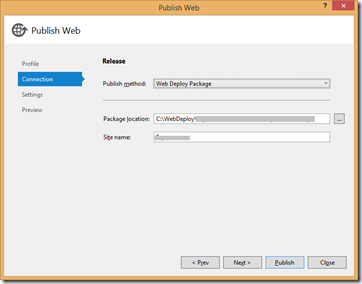 Once this is done your package will be built (assuming that this is Web Deployment Package and not some other form of deploy) and available on your drops location. The values you may wish to alter are probably in the [your package name].SetParameters.xml file, which you can alter with whichever transform technology you wish to use e.g. SlowCheetah or Release Management workflows.

One potential gotcha I had whilst testing with MSBuild from the command line, is that the .pubxml files contains a value for the property  <DesktopBuildPackageLocation>. This will be the output path you used when you created the publish profile using the wizard in Visual Studio.

If you are testing your arguments with MSBuild.exe from the command line this is where the output gets built to. If you want the build to behave more like TFS build (using the obj/bin folders) you can by clearing this value by passing the MSBuild argument /p:DesktopBuildPackageLocation=””.

You don’t need to worry about this for the TFS build definitions as it seems to be able to work it out and get the correctly packaged files to the drops location.