When working with web applications we tend to use MSDeploy for distribution. Our TFS build box, as well as producing a _PublishedWebsite copy of the site, produce the ZIP packaged version we use to deploy to test and production servers via PowerShell or IIS Manager

To create this package we add the MSBuild Arguments /p:CreatePackageOnPublish=True /p:DeployOnBuild=true /p:IsPackaging=True 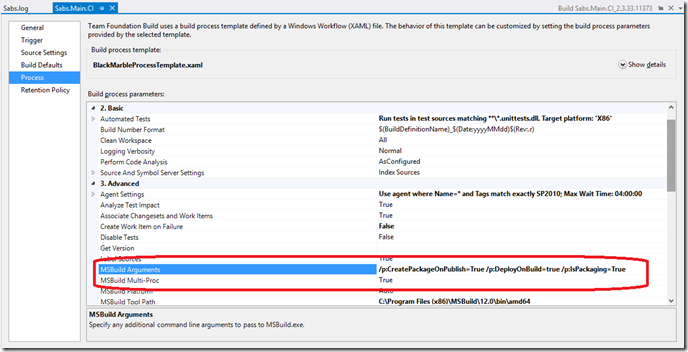 This was been working fine, until I upgraded our TFS build system to 2013.2. Any builds queued after this upgrade, that builds MSDeploy packages, gives the error

If I removed the /p:DeployOnBuild=true argument, the build was fine, just no ZIP package was created.

After a bit of thought I realised that I had also upgraded my PC to 2013.2 RC, the publish options for a web project are more extensive, giving more options for Azure.

So I assumed the issue was a mismatch between MSBuild and target files, missing these new options. So I replaced the contents of C:\Program Files (x86)\MSBuild\Microsoft\VisualStudio\v12.0\Web on my build box with the version from my upgraded development PC and my build started working again.

Seems there are some extra parameters set in the newer version of the build targets. Lets see if it changes again when Visual Studio 2013.2 RTMs.