I seem to be involved with a number of TFS 2010 to 2013 upgrades at present. I suppose people are looking at TFS 2013 in the same way as they have historically looked at the first service pack for a product i.e: the time to upgrade when most of the main issues are addressed. That said TFS 2013 is not TFS 2012 SP1!

A common question is how long will the process take to upgrade each Team Project Collection? The answer is that it depends, a good consultants answer. Factors include the number of work items, size of the code base, number of changesets, volume of test results and the list goes on.  The best I have been able to come up with is to record some timings of previous upgrades and use this data to make an educated guess.

In an upgrade of a TPC from TFS 2010 to 2013 there are 793 steps to be taken. Not all these take the same length of time, some are very slow as can be seen in the chart. I have plotted the points where the upgrade seems to pause the longest. These are mostly towards the start of the process where I assume the main  DB schema changes are being made 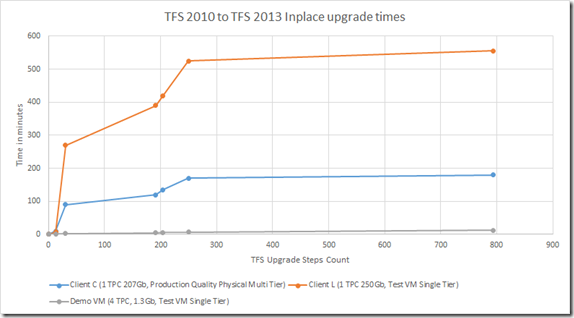 To give some more context

Given this chart, if you know how long it takes to get to Step 30 of 793 you can get an idea of which of these lines closest matches your system.

I will continue to update this post as I get more sample data, hope it will be of use to others to gauge how only upgrades may take, but remember your mileage may vary.