I have just been reading Software Testing using Visual Studio 2012 by Subashni. S and Satheesh Kumar. N from Packt Publishing 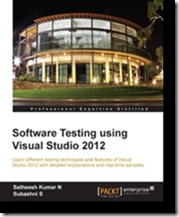 This book does what it says on the cover, it is a general introduction to the testing tools within the Visual Studio 2012 family. My comment is not about how well it is done, it is a clear enough introduction, but why produce a book that really just covers what is in MSDN, Channel9, numerous podcasts, blogs and ALM Rangers documentation?

I suppose this is a question of target audience, some people like to browse a physical book for ‘new’ technology, I can see that (though I tried it on Kindle, more of that later). This book certainly does cover the core areas, but sits strangely between a technology briefing for a manager/person who just needs an overview (it is all a bit long winded, list all the features and flags of tools) and not enough detail for the practitioner (the exercises do not go deep enough unlike those provide by Microsoft in Brian Keller VS/TFS demo VM series)

Given this concern I wonder who the target audience really is?

A real issue here is that Microsoft have gone to quarterly updates, so the product is always advancing, faster than any print book can manage (Microsoft’s own MSDN documentation has enough problems keeping up, and frequently is play catch up). For a book on testing this is a major problem as ‘test’ has been a key focus for the updates. This means when the book’s contents is compared to Visual Studio/TFS 2012.3 (the current shipping version at the time of this review) there are major features missing such as

The list will always grow while Microsoft stick to their newer faster release cycle. This was not too much of a problem when Microsoft shipped every couple of years, a new book opportunity, but now how can any book try to keep up on a 12 week cycle?

One option you would think is Kindle or eBooks in general, as at least the book can be updated . However there is still the issue of the extra effort of the authors and editors, so in general I find these updates are not that common. The authors will usually have moved onto their next project and not be focused on yet another unpaid update to a book they published last quarter.

As to my experience on the Kindle, this was the first technical book I have read on one. I have used the Kindle App on a phone for a couple of years for my novel reading, but always felt the screen was too small for anything that might have a diagram in it. I recently bought a Kindle Paperwhite so though I would give this book a go on it. I initially tried to email the book from the Packt site straight to my Kindle, but this failed (a file size issue I am told by Packt customer support), but a local copy of USB was fine.

So how was the Kindle experience? OK, it did the job, everything was clear enough,  it was not a super engaging reading experience but it is a technical book, what do you expect? It was good enough that I certainly don’t see my getting too many paper books going forward whether thet be novels or technical books.

So in summary, was the book worth the effort to read? I always gauge this question on ‘did I learn something?’ and I did. There is always a nugget or two in books on subjects you think you know. However, ‘would I say it is a really useful/essential read for anyone who already has a working knowledge in this subject?’, probably not. I would say their time is better spent doing a hand on lab or watching conference recordings on Channel9.

Leave this book to anyone who wants a general written introduction to the subject of Microsoft specific testing tooling.