Just wasted a bit of time trying to find the build tab on a TFS Team Project hosted on the hosted http://tfs.visualstudio.com using a Git repository. I was looking on team explorer expecting to see something like

But all I was seeing the the Visual Studio Git Changes option (just the top bit on the left panel above).

It took to me ages to realise that the issue was I had cloned the Git repository to my local PC using the Visual Studio Tools for Git. So I was just using just Git tools, not TFS tools. As far as Visual Studio was concerned this was just some Git repository it could have been local, GitHub, TFS Service or anything that hosts Git.

To see the full features of TFS Service you need to connect to the service using Team Explorer (the green bits), not just as a Git client (the red bits) 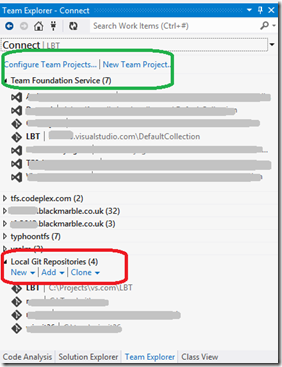 Of course if you only need Git based source code management tools, just clone the repository and use the Git tooling, where inside or outside Visual Studio. The Git repository in TFS is just a standard Git repro so all tools should work. From the server end TFS does not care what client you use, in fact it will still associate you commits, irrespective of client, with TFS work items if you use the #1234 syntax for work item IDs in your comments.

However if you are using hosted TFS from Visual Studio, it probably makes more sense to use a Team Explorer connection so all the other TFS feature light up, such as build. The best bit is that all the Git tools are still there as Visual Studio knows it is still just a Git repository. Maybe doing this will be less confusing when I come to try to use a TFS feature!