My Windows 8 based Lenovo W520 has an Intel Centrino Ultimate-N 6300 Wifi chipset, it has been giving me problems with this for a while.

The most usual problem is that if I sleep or hibernate the PC when I restart it, in a different location, there is a chance I cannot connect to Wifi networks. I can see them, get a limited connection but no IP address as DHCP fails. Sometimes using the hardware Wifi switch on the front left of the PC helps, sometimes switching into Windows 8 airplane mode and back out does, but not always. Often I need to restart the PC.

I have also had problems in Lync video calls, for example on Friday I was having all sorts of problems with a call, it was working for a few minutes then locking. When we swapped to a colleagues supposedly identical W520 all was OK.

So I think I have a problem. Time for some digging.

So I thought it was worth trying newer drivers, I had the default 15.1.x drivers provided by Windows update that are about  12 months old. I got the latest 15.6.x from Lenovo. 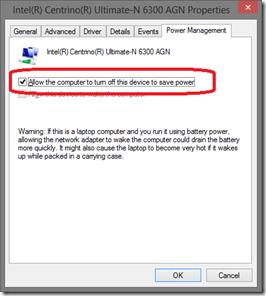 At first I thought this was helping, but I found if my PC screen locks due to inactivity I got a blue screen of death when I login again – with a watchdog timer error. So I switched the power save management back on and this seems to have fixed this problem.

So with the new drivers I now get a new set of behaviours.

It then occurred to me to think what the different between my PC and my colleagues?  I had a Hyper-V virtual switch configured to use Wifi. I tried deleting this, but it appears to have no effect on the 5Ghhz problem. So maybe a read herring.

So now I think my system is more stable, but only time will tell if it is working well enough. The biggest test will be the Lync based webinar I am doing on DevOps in a couple of weeks.

Updated 4 Nov 2013: I have add an offline discussion about this issue, the summary of which is it appears the problem is not that of Lenovo but of Intel and/or Netgear. I seems the laptop is not listening to the instruction it gets properly or the router isn’t sending it correctly and this happens on many brands of kit. In some cases the solution is to right click on the wireless connection in use and choose properties change the encryption from aes to tkip wait a few minutes and you are back on the internet, or just a restart of the wifi stack.

One Reply to “Lenovo W520 problems with Wifi and Windows 8”