I recently posted on how you could use the new fakes tools in VS11 to fake out SharePoint for testing purposes. I received comments on how I could make my Shim logic easier to read so though I would revisit the post. This led me down a bit of a complex trail, and to Pete Provost for pointing the way out!

When I did the previous post I had used SP2007, this was because I was comparing using Microsoft Fakes with a similar sample I had written ages ago for Typemock Isolator. There was no real plan to this choice, it was just what had to hand at the time. This time I decided to use SP2010, this was the process used that actually worked (more on my mistakes later) … 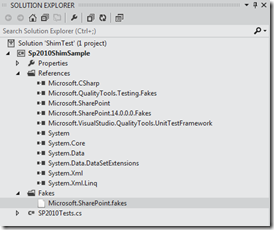 So why did I get lost? Well before I changed the targeted framework, I had tried to keep adding extra references to DLLs that were referenced by the DLL I was trying to fake, just as mentioned in my previous post. This went on and on adding many SharePoint and supporting DLLs, and I still ended up with errors and no Microsoft.SharePoint.14.0.0.0.Fakes.DLL. In fact this is a really bad way to try to get out of the problem as it does  not help and you get strange warnings and errors about failures in faking the are not important or relevant e.g.

The key here is that you must be targeting a framework that the thing your are trying to fake targets. For SP2010 this should really be .NET 3.5 but you seem to get away .NET 4.0 but 4.5 is certainly a step too far. If you have the wrong framework you can end up in this chain of added dependency references that you don’t need and are confusing at best and maybe causing the errors nor fixing them. In my case it seem a reference to Microsoft.SharePoint.Library.DLL stops everything working, even if you then switch to the correct framework. When all is working you don’t need to add the dependant references this is all resolved behind the scenes, not by me adding then explicitly.

So once I had my new clean project, with the correct framework targeted and just the right assemblies referenced and faked I could write my tests, so now to experiment a bit more.