I think my biggest issue with TFS2010 is the problem that a build controller is tied to a single Team Project Collection (TPC). For a company like mine where we run a TPC for each client this means we have had to start to generate a good number of virtualised build controller/agents. It is especially irritating as I know that the volume of builds on any given controller is low.

A while ago Jim Lamb blogged about how you could define multiple build services on a single box, but the post was full caveats on how it was not supported/recommended etc. Well since this post there has been some discussion on this technique and I think the general feeling is, yes it is not supported, but there is no reason it will not function perfectly well as long as you consider some basic limitations:

Jims instructions are straight forward, but I did hit a couple of snags:

After a bit of retyping this went away. I think it was down to stray spaces at end of SET variable, but not 100% sure over this. I would just make sure you strings match if you see this problem. 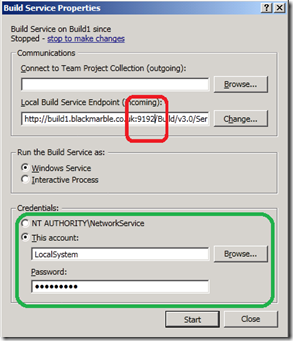 Once this is set you can start the service and configure the controller and agent(s) exactly as normal.

You might want to consider how the workspace is mapped to the your multiple controllers, so you use different root directories, but that is your call. Thus far leaving it all as it was when I was using a separate VM for each build is working fine for me.

We shall see how many services I can put onto single VM, but it is certainly something I don’t want to push to hard. However that said if you are like use with a relatively low load on the build system this has to be worth looking at to avoid proliferation of build VMs.