The Web Client for TFS 2010 (what was called Team System Web Access TSWA) is now installed as a core part of the Application Tier. It is no longer a separate install as it was in previous versions. This means it is easy to implement, it is just there by default. However, this can raise some problems if intend to expose to TFS AT via a firewall to the Internet, or use an alias for your TFS AT. This is because, by default, the Web Client uses it’s host server name as the AT name to connect to, it assumes the AT is local.

So for example, if you install your AT on SERVER1 you can set the server so that it responds to calls to the name TFS.DOMAIN.COM (after suitable DNS registration and disabling of local loopback checks on the server). So all your TFS clients should be able to access the server via http://tfs.domain.com:8080/tfs. However if a user tried to access the sever via Web Client URL of http://tfs.domain.com:8080/tfs/web they will get an error that that the inferred local AT (http://server1:8080/tfs) cannot be resolved (from where they are outside the firewall. 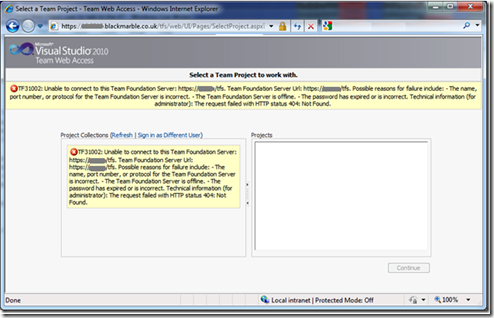 This is easily addressed edit the C:\Program Files\Microsoft Team Foundation Server 2010\Application Tier\Web Access\Web\web.config file and explicitly name the AT to be used for the web client. This is in the block

Note here the sample URL is wrong, when you are done it should look something like

Interestingly this fixes the issue on the screen shot above for the lower instance of the error, but not, the upper one. However that is enough to get you into the client and you don’t see the error after that.