I find one of the most often overlooked new features of 2010 is the Symbol Server. This is a file share where the .PDB symbol files are stored for any given build (generated by a build server, see Jim Lamb’s post on the setup). If you look on the symbol server share you will see directories for each built assembly with a GUID named subdirectory containing the PDB files for each unique build.

So what is this Symbol Server used for? Well you can use the Symbol Server to enable debug features such as Intellitrace, vital if you are using Lab Manager. In effect this means that when viewing an Intellitrace log Visual Studio is able to go to the Symbol Server to get the correct .PDB file for the assemblies being run, even if the source is not available, thus allowing you to step through the code. It can also be used for remote debugging of ASP.NET servers.

A bonus is that you can debug release code, as long as you produced .PDB symbols and placed them on the Symbol Server when you built the release (by altering the advanced build properties shown below). 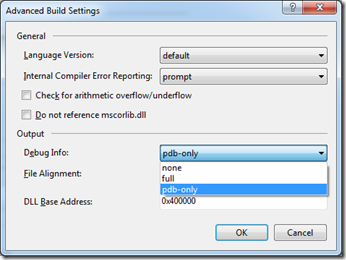 Key to remember here is that the client PC that generates the Intellitrace file does not need access to the PDB files, only the PC handling the debugging process needs to be able to access the symbols. Perfect for release codes scenarios.

This ability to debug into code that you don’t have the source for extends to debugging into Microsoft .NET framework code. Microsoft have made public a Symbol Server for just this purpose. To use it you have to enable it using the Tool > Option > Debugging > Symbols dialog. 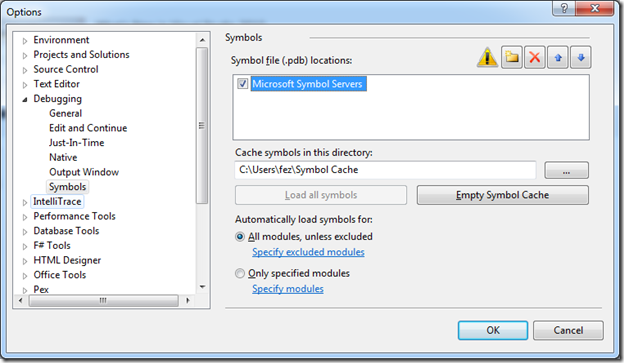 All this should make debugging that hard to track problem just that bit easier.