When you use the InvokeProcess activity, as I did in my Typemock post, you really need to setup the logging. This is because by default nothing will be logged other than the command line invoked, not usually the best option. There are a couple of gotta’s here that initially caused me a problem and I suspect could cause a new user of the 2010 build process a problem too. 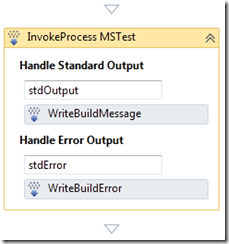 You then need to add the WriteBuildMessage and WriteBuildError activities by dragging them from the toolbox into the hander areas of the InvokeProcess activity.

The second gotta is that the WriteBuildMessage takes a logging level parameter. This defaults to normal, this means the message will not be displayed in the standard build view (unless the build’s detail level is altered). To get ground this, as I would normally want to see the output of the process being invoked, I would set the Importance of the message to High. Remember you also need to set the Message parameter to the previously declared variable name, in my case stdOutput. This is done in the properties windows as shown below.

Note that you don’t need to set an importance on the WriteBuildError activity as this is automatically always displayed, you just need to set the Message parameter to stdError.