I have just release 3.46.4 of my Azure DevOps Cross-Platform release Notes task which adds support for generating release notes based on the results of Azure DevOps Test Plans.

There has been support in the task for automated tests, run as part of the build or release process, for a while. However, until this release, there was no way to generate release notes based on manual tests.

The second object, to store the test configurations, is required because the test results only contain the ID of the configuration used, not any useful detail such as a name or description. The extra object allows a lookup to be done if this information is required in the release notes e.g. if you have chosen to list out each test, and each test is run multiple times in a test run against different configurations e.g. UAt and Live

Using a template in this form

Or detailing out all the individual test

I have recently be working on a release pipeline that deploys to a server behind a corporate firewall. This is done using an Azure DevOps private build agent and works fine.

As the service is a basic REST service and takes a bit of time to start-up I though a gate was a perfect way to pause the release pipeline until service was ready for the automated tests.

However, I hit a problem, the gates always failed as the internal server could not be resolved.

After a bit of thought I realised why. Gates as actual agentless tasks, they don’t run on the agent but on the server, so are outside the firewall. They could never connect to the private service without ports being opened, which was never going to happen.

So at this point in time I can’t use gates on this pipeline. Any similar logic to do the same job would have to be developed as scripts I can run on an agent.

For a good few months now YAML builds have been available. These provide the key advantage that the build is defined in a YAML text file that is stored with your product’s source code, thus allowing you to more easily track build changes. Also bulk editing becomes easier as a simple text editor can be used.

I have been putting off moving my current GUI based builds for as there is a bit of work, this post document then step.

I then created an empty file azure-pipelines-build.yaml the same folder as the root of the extension I was replacing the build for. I created the empty text file. I did this as the current create new build UI allows you to pick a file or a create one, but if you create one it gives you no control as to where or how it is named 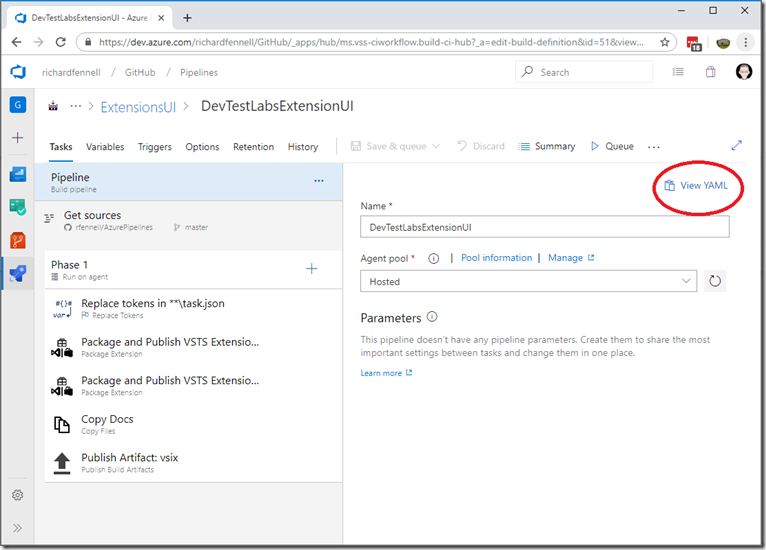 Note:  Initially I found this link disabled, but if you click around the UI, into the task details, variables etc, it eventually becomes enabled. I have no idea why.

Copy this YAML into you newly created azure-pipelines-build.yaml file, committed the file and pushed it GitHub as the new branch.

I then created a new YAML based build, picking in my case GitHub as the source host, the correct branch, and correct file.

This YAML contains the  core of what is needed, but the build was missing some some items such as triggers, build number and variable.

to the .YAML file, but decided to declare my variables as they contained secrets within the build definition in Azure DevOps.

The final YAML file was can be viewed here

What I fixed in passing

In the past I used to package up my extensions twice, once packaged as private (for testing) and once as public. This was due to the limitation of the Azure DevOps Marketplace and the release tasks I was using at the time. Whilst passing a took the chance to change to only building the public VSIX package, but updated my release pipeline process to dynamically inject the settings for private testing. This was done using the newer Azure DevOps Extensions Tasks.

Swapping in the new build into the release process

Once this was done I triggered a new GitHub PR and everything worked as expects.

I have kept the old build about just in case there is a problem I have not spotted, but I intend to delete this soon.

I now need to make the same changes for all my other build. The only difference for from this process will be for builds that make use of Task Groups, such as all those for Node based extensions. Task Groups cannot be exported as YAML at this time, so I will have to manually rebuilding these steps in a text editor. So more prone to human error, but I think it needs to be done.

So a nice back burner project. I will probably update them as release new versions of extensions.

I have posted in the past a quick script to generate some markdown documentation for the YAML usage of Azure DevOps Pipeline extensions. Well I decided that having this script as a task itself would be a good idea, so a wrote it, and please to say have just release it to the marketplace

I am starting to use this extension, with my WIKIUpdater extension, in my release pipelines to make sure my extension’s GitHub WIki is up to date.

It is going to take a bit of work to update all my pipelines, but the eventual plan is to use the YAML document generator in the builds, adding the readme and YAML markdown files to the build as artefacts. Then deploying these files to the wiki in a later stage of the pipeline.

Hope some of you find it of use.

I am automating the process by which we keep our build agent up to date. The basic process is to use a fork of the standard Microsoft Azure DevOps Pipeline agent that has the additional code included we need, notably Biztalk.

Once I have the Packer created VM up and running, I need to install the agent. This is well document, just run .config.cmd –help for details. However, there is no option to add user capabilities to the agent.

I know I could set them via environment variables, but I don’t want the same user capabilities on each agent on a VM (we use multiple agents on a single VM).

There was no documented Azure DevOps API I could find to add capabilities, but a bit of hacking around with Chrome Dev tools and Postman got me a solution, which I have provided a GIST

A major problem when moving from the graphic editing of Azure Pipeline builds to YAML has been the difficulty in knowing the options available, and of course making typos. 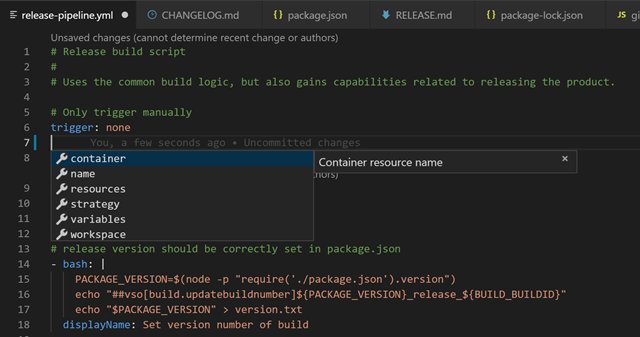 I have yet to give it a really good workout, but first impressions are good.

It does not remove the need for good documentation of task options, there is a need for my script to generate YAML documentation from a task.json file, but anything extra to ease editing helps.

I have just release a new Azure DevOps Pipelines extension to update a page in a Git based WIKI.

It has been tested again

It takes a string (markdown) input and writes it to a new page, or updates it if it already exists. It is designed to be used with my Generate Release Notes Extension, but you will no doubt find other uses

Whilst listening to a recent  Radio TFS it was mentioned that TFS Aggregator uses the C# SOAP based Azure DevOps APIs; hence needed a major re-write as these APIs are being deprecated.

Did you know that there was a REST API alternative to TFS Aggregator?

My Azure DevOps Services & Server Alerts DSL is out there, and has been for a while, but I don’t think used by many people. It aims to do the same as TFS Aggregator, but is based around Python scripting.

However, I do have to say it is more limited in flexibility as it has only been developed for my (and a few of my clients needs), but its an alternative that is based on the REST APIs.

Scripts are of the following form, this one changes the state of a work item if all it children are done

I have recently done a fairly major update to the project. The key changes are:

Full details are on the project can be seen on the solutions WIKI, maybe you will find it of use. Let me know if the documentation is good enough