I have been developing a few VSTS/TFS build related extensions and have published a few in the VSTS marketplace. This has all been a somewhat manual process, a mixture of Gulp and PowerShell has helped a bit, but I decided it was time to try to do a more formal approach. To do this I have used Jesse Houwing’s VSTS Extension Tasks.

Even with this set of tasks I am not sure what I have is ‘best practice’, but it does work. The doubt is due to the way the marketplace handles revisions and preview flags. What I have works for me, but ‘your mileage may differ’

The core of my workflow is that I am building the VSIX package twice, once as a private package and the other as a public one. They both contain the same code and have the same version number, they differ in only visibility flags

I am not using a the preview flag options at all. I have found they do not really help me. My workflow is to build the private package, upload it and test it by sharing it with a test VSTS instance. if all is good publish the matched public package on the marketplace. In this model there is no need to use a preview, it just adds complexity I don’t need.

This may not be true for everyone.

The build’s job is to take the code, set the version number and package it into multiple VSIX package.

So now I have multiple VSIX packages I can use the same family of tasks to create a release pipeline.

I create a new release linked to be a Continuous Deployment of the previously created build and set its release name format to Release-$(Build.BuildNumber)

My first environment uses three tasks, all using the option – to work from a VSIX package.

Note In all cases I am using the VSIX path in the format $(System.DefaultWorkingDirectory)/GenerateReleaseNotes.Master/vsix/<package name>-<tag>-$(Build.BuildNumber).vsix. I am including the build number variable in the path as I chose to put all the packages in a single folder, so path wildcards are not an option as the task would not know which package to use unless I alter my build to put one VSIX package per folder.

My tasks for the first environment are

If I only intend a extension to ever be private this is enough. However I want to make mine public so I add a second environment that has manual pre-approval (so I have to confirm the public release)

This environment only needs single task

So now I have a formal way to release my extensions. The dual packaging model means I can publish two different versions at the same time one privately and the other public

It is now just a case of moving all my extensions over to the new model.

Though I am still interested to hear what other people view are? Does this seem a reasonable process flow?

If you are using Pester to unit test your PowerShell code then there is a good chance you will want to include it in your automated build process. To do this, you need to get Pester installed on your build machine. The usual options would be

If you own the build agent VM then any of these options are good, you can even write the NuGet restore into your build process itself. However there is a problem, both the first two options need administrative access as they put the Pester module in the $PSModules folder (under ‘Program Files’); so these can’t be used on VSTS’s hosted build system, where your are not an administrator

So this means you are left with copying the module (and associated functions folder) to some local working folder and running it manually; but do you really want to have to store the Pester module in your source repo?

My solution was to write a vNext build tasks to deploy the Pester files and run the Pester tests.

The Pester task does not in itself upload the test results, it just throws and error if tests fails. It relies on the standard test results upload task. Add this task and set 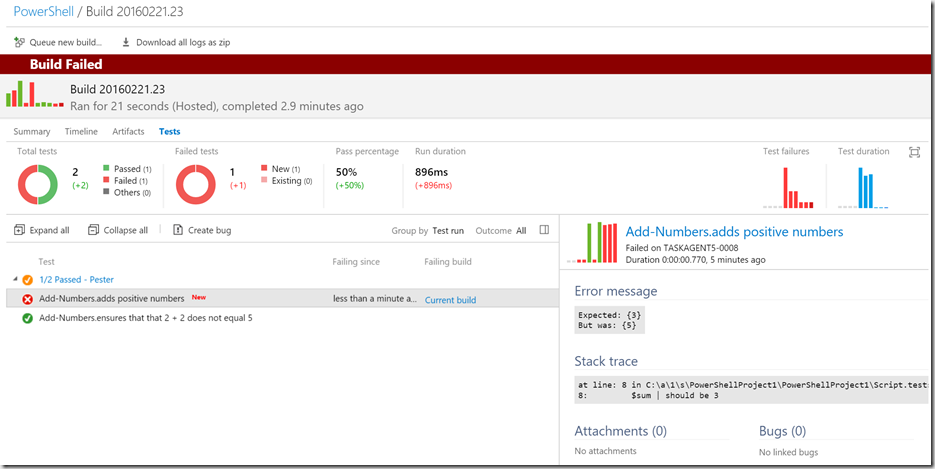 You can find the task in my vNextBuild repo