Following a ‘hiccup’, involving a Web Application Proxy (WAP) server, internal services were no longer being published to the outside world.

After some investigation, both the ADFS and WAP services showed as stopped on the server. Attempting to start the ADFS service from the services console produced the following error:

Windows could not start the Active Directory Federation Service service on Local Computer.
Error 1064: An exception occurred in the service when handling the control request.

Under the System section of the Windows Event Log, the following error was shown:

Event ID: 7023
The Active Directory Federation Services service terminated with the following error:
An exception occurred in the service when handling the control request.

Followed a few moments later by the following error:

Event ID: 7023
The Web Application Proxy Service terminated with the following error:
A certificate is required to complete client authentication

Looking in the ‘AD FS’ section of the Event Log (under ‘Applications and Services Logs’), the following errors were shown (note that the first error was generally shown multiple times, followed by a single instance of the second error):

Checking the file at C:\Windows\ADFS\Config\microsoft.identityServer.proxyservice.exe.config showed that while the file size was still indicated as 2k, the file was blank.

I’ve seen a number of reports online indicating that WAP seems happy to chew up the contents of this configuration file following an outage, although I can find no information on why this might happen. If you have a backup of the file in question, it should be a simple matter to restore this file and restart the ADFS and WAP services to restore service. If you don’t, and have no other example server from which you can pull a similar copy of the file then the following steps must be taken:

For reference, here’s a sample config file, from which you should be able to reconstruct an appropriate file for your service:

As with all systems using certificates for security, there comes a time when the certificate is expiring and needs to be replaced. here’s the procedure for ADFS 3.0 and WAP:

Starting with the ADFS server:

Additional configuration is required on the WAP server:

During a recent upgrade of ADFS from 2.0 to 3.0, we saw an interesting issue publishing the ADFS 3.0 proxy through TMG 2010.

The ADFS 2.0 proxy was published via TMG using a non-preauthenticating publishing web rule which had worked happily since ADFS was first used. When ADFS 3.0 was installed ad configured, the firewall rule was modified to change the IP address that should be used to direct traffic to the ADFS 3.0 proxy instead of the old ADFS 2.0 proxy. When tested, this generated an error in the browser of the user attempting to access the ADFS proxy to sign into their organisation account: 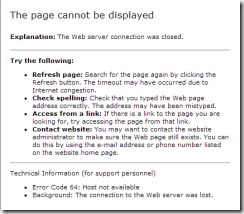 “The page cannot be displayed. Error Code 64: Host not available”

In addition, the test of the firewall rule fails with the error “Connectivity error. Error details: 64 – The specified network name is no longer available.”

The solution is to use a non-web server publishing rule on TMG to simply forward all traffic to the ADFS proxy/Web Application Proxy, however this requires that a dedicated external IP address is available on TMG, or all applications need to be published using the Web Application Proxy instead of using TMG.