One of the issues I’ve seen during our migration of virtual machines to our new Windows Server 2008 R2 Hyper-V cluster relates to network load balancing (NLB).  We have a number of NLB setups running which will need migrating in time.  My first test migration of a pair of NLB virtual machines (actually, technically a trio of servers making up a SharePoint farm) didn’t go as smoothly as I’d hoped.

The machines in question have been running on a Windows Server 2008 Hyper-V machine quite happily for some time.  I followed the procedure we’ve used to migrate other machines to our new Windows Server 2008 R2 Hyper-V cluster, connecting both network adaptors to the appropriate network when the import had completed.  When I looked at the network settings in the GUI, two network adaptors showed up and the configuration at first glance seemed okay.  When looking at the network configuration using ipconfig however, only the values for one network adaptor (the primary, i.e. non-NLB, adaptor) were shown, with the NLB adaptor missing in action.

In addition, NLB manager showed the following error when I tried to reconfigure the cluster: 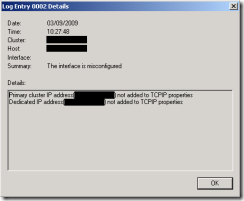 The solution to the issue is actually simple; in the Hyper-V VM settings for the NLB network adaptor, turn on MAC address spoofing: 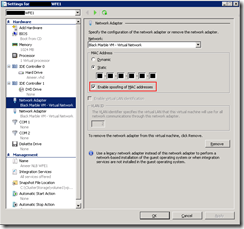 This immediately fixed the issues we were seeing with the NLB adaptor of the machines we were migrating.